Limestone Sculpture from the Abbey at Saint-Guilhem-le-Désert 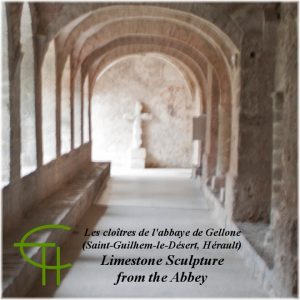 Limestone Sculpture from the Abbey at Saint-Guilhem-le-Désert

Limestone Sculpture from the Abbey

The Benedictine Abbey of Gellone at Saint-Guilhem-le-Désert lies in a small valley at the mouth of the cirque du Bout-du-Monde, in a forbidding and desolate landscape of high cliffs and deep gorges drained by the Herault River, approximately 30 kilometers northwest of Montpellier. Stone for the erection of the Abbey and for the sculptures and architectural decoration that once ornamented its buildings very probably came from the limestone formations of the surrounding region (Fig. 1).

Recently the composition of limestone from quarries known to the medieval craftsmen of that region and from sculptures that once embellished the Abbey has been determined by neutron activation analysis. This paper demonstrates that statistical treatment of the resulting compositional data permits us to distinguish among stone sources and to associate the sculpture with the source of its raw material. The identification of stone sources is important to art and architectural historians because it sheds light on the economics, transportation and other procurement problems of medieval builders in the region.

Neutron activation analysis quantifies the concentrations of approximately twenty compositional variables present in each stone sample. These variables, which constitute the compositional profile of the stone, include eleven or twelve that are especially useful in distinguishing among limestones from different geological formations and different sculptures.

Regional sources of limestone probably known to medieval artisans and possibly used for much of the sculptural decoration at the Abbey produced one of three different types of stone :